The Lisbon International Exposition of 1998 was a historic moment, both for the city and for the country. Under the theme The Oceans, Heritage for the Future, and with the purpose of commemorating the 500 years of the Portuguese Discoveries, Expo'98 transformed a degraded area of the city into a residential area with all the characteristics of a modern metropolis worth discovering.

The 50-hectare zone where Parque das Nações is located today and which runs along the river for five kilometers was, at the end of the 1980s, a field of containers, slaughterhouses and polluting industries, where nearby homes were decadent, poor and unhealthy. In 20 years, much has changed in this eastern part of the city, especially in the preparation phase for Expo’98. At the end of the world exhibition, there was concern that the equipment of the venue had later use, in order to avoid its abandonment and degradation. At the same time, large public contracts were launched, such as the Vasco da Gama Bridge, a rail interface and a new metro line with seven stations. This area has become one of the most modern districts of the city, bringing together commercial, cultural and leisure areas and attracting many companies and institutions, all with a privileged view over the Tagus. 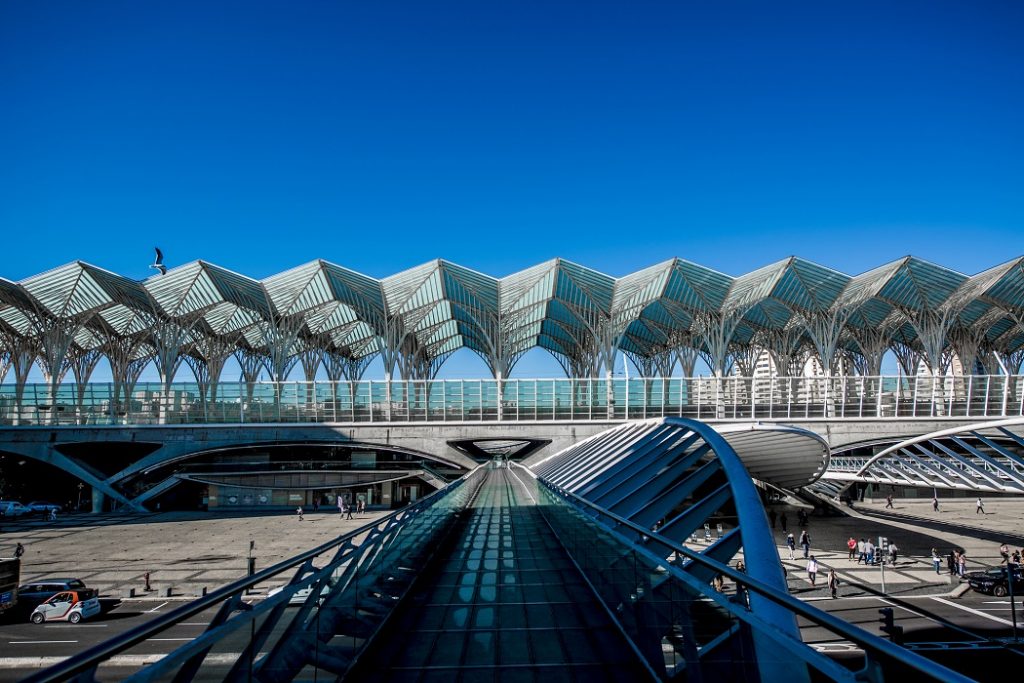 The Oriente Station, bold construction of Santiago Calatrava marks the starting point of this itinerary. With a steel based structure, it is often compared to a Gothic cathedral, but breaks with the medieval tradition of the horizontal design of the clasp line. In his creation, the Spanish architect took advantage of tradition and modernization as a bridge between the past and the future, and on the upper platform, Calatrava used the iconography of the tree related to the hills of Lisbon. The structure, which won the Brunel Prize in 1998, accommodates one of Lisbon’s most important railway and bus stations, a metro station (Oriente) and a shopping area. 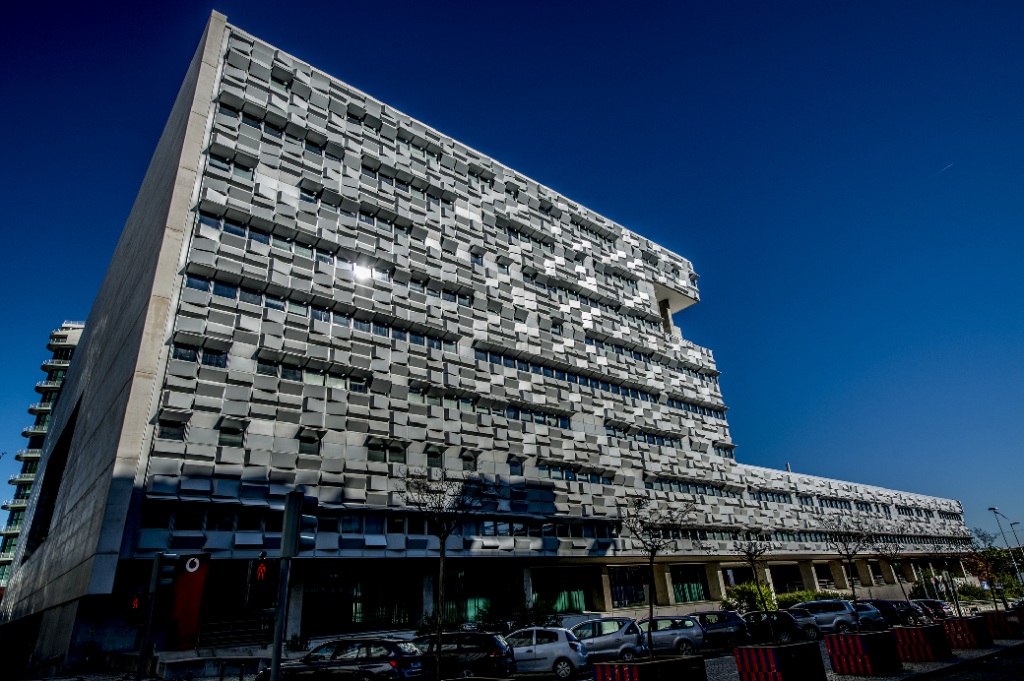 With its back to Estação do Oriente, at the intersection of D. João II Avenue and Avenida do Pacífico, stands the Vodafone building, by Alexandre Burmester and José Carlos Gonçalves. Primo Valmor 2005, this construction develops at the fenestration level, a contemporary reinterpretation of some themes of the Renaissance architecture, and it is possible to establish an analogy between it and the Casa dos Bicos. It has two distinct faces, one open to the river and another to the avenue, and has a construction area of approximately 70 thousand square meters. It is a building with great urban impact, both for its size and architectural value, and for the technological challenges involved.

In the background, you can see the Pavilion of Portugal, by Álvaro Siza Vieira and now belongs to Lisbon’s University, responsible for its maintenance. It is a building composed of two separate bodies, one of which corresponds to the building – a solid and sober volume – and the other corresponds to a large square covered by an imposing and gigantic concrete palette. The one that is a prodigious work of engineering, is based on the idea of a sheet of paper placed on two bricks. 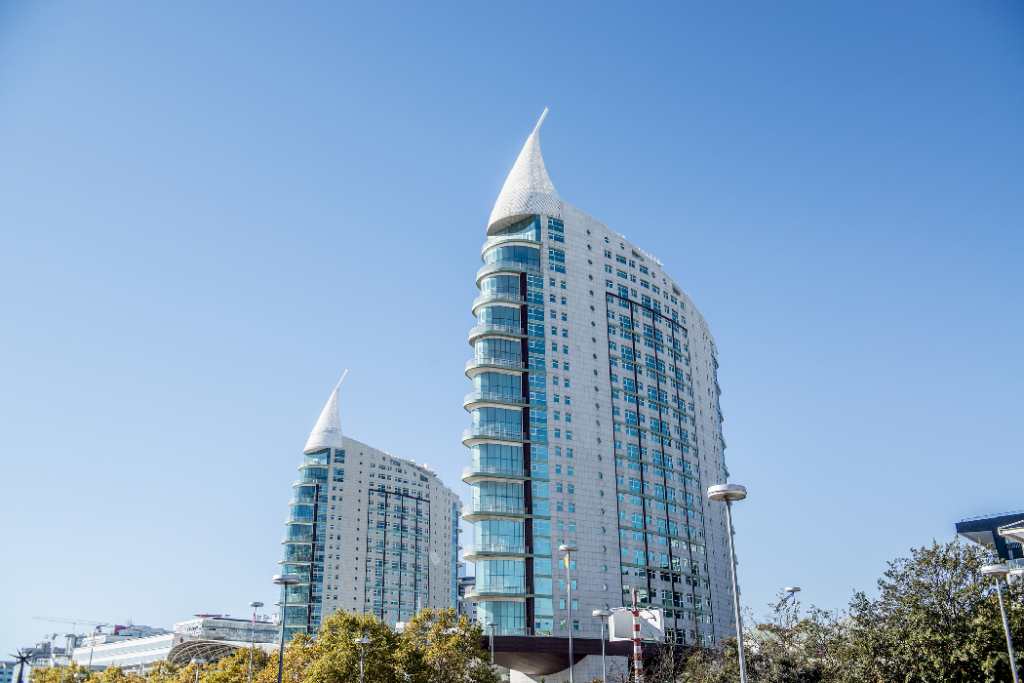 From there, you can still see the Towers of São Rafael and São Gabriel, housing buildings with 110 meters of height of José Quintela. The architecture is visibly inspired by the simplicity and elegance of a boat’s bow towards the river. At the top, two candles appear. 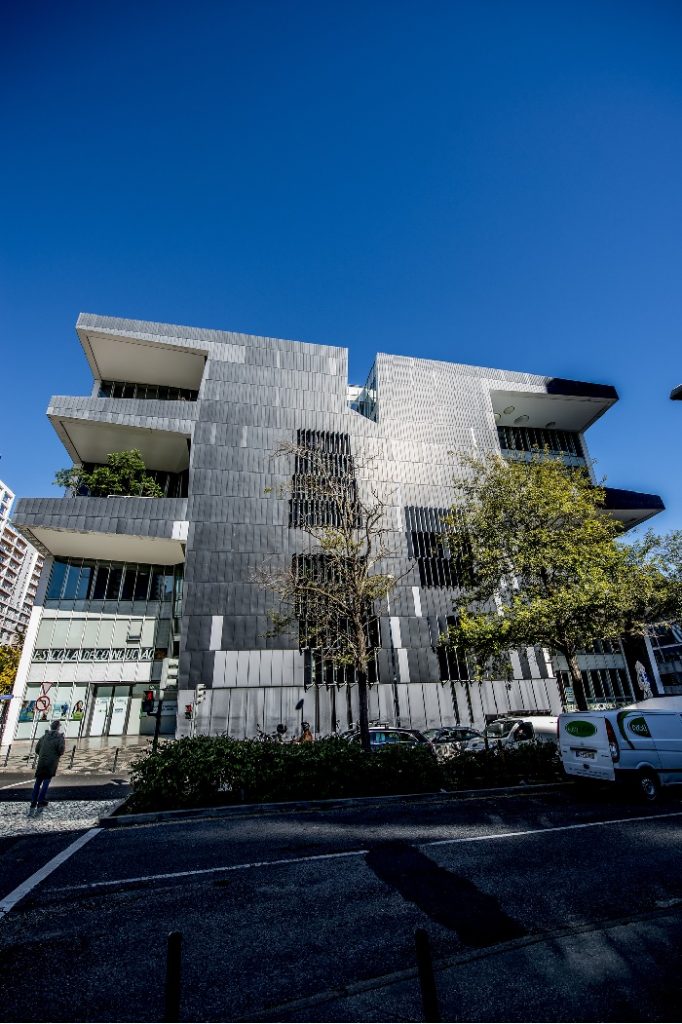 Following D. João II Avenue, next to the Vasco da Gama Shopping Center and at the intersection with Avenida do Índico, the Atelier ARX, by architects Nuno and José Mateus. Intended for offices, commerce and parking, this construction consists of an absolute black granite box softened. It has a unique and contemporary identity and a bio-climatic conception. This box is perforated in the corners, opening over the envelope and emitting audiovisual contents to the outside. 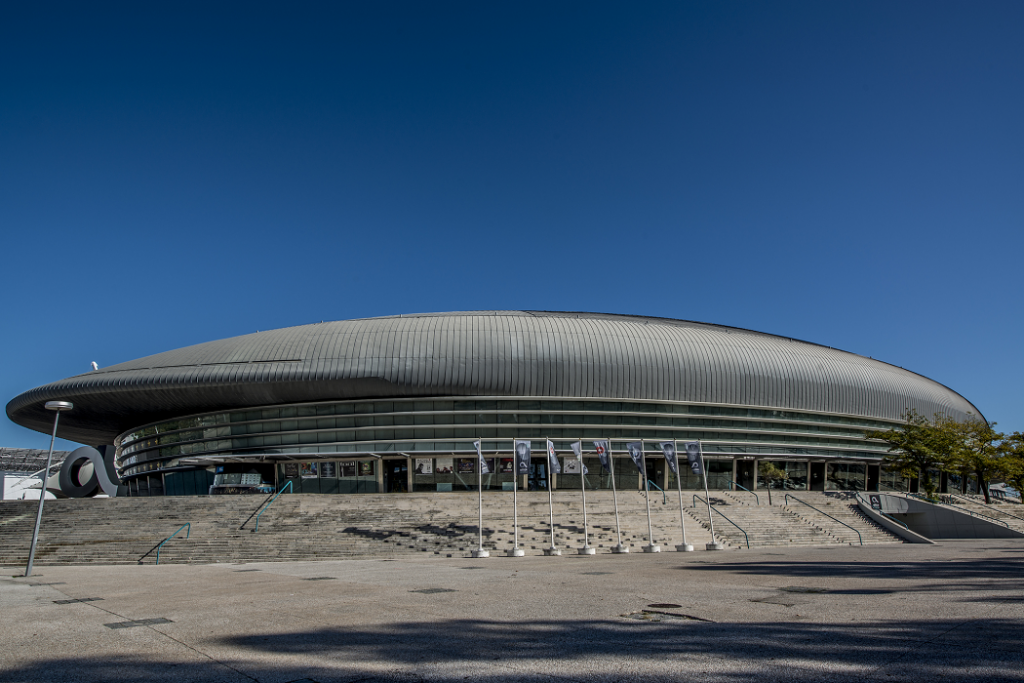 In the background, the Altice Arena, of Regino Cruz, nowadays one of the main halls of spectacles of the country, and that during these 20 years, has hosted several initiatives such as the Web Summit and the Summit of the Nato. 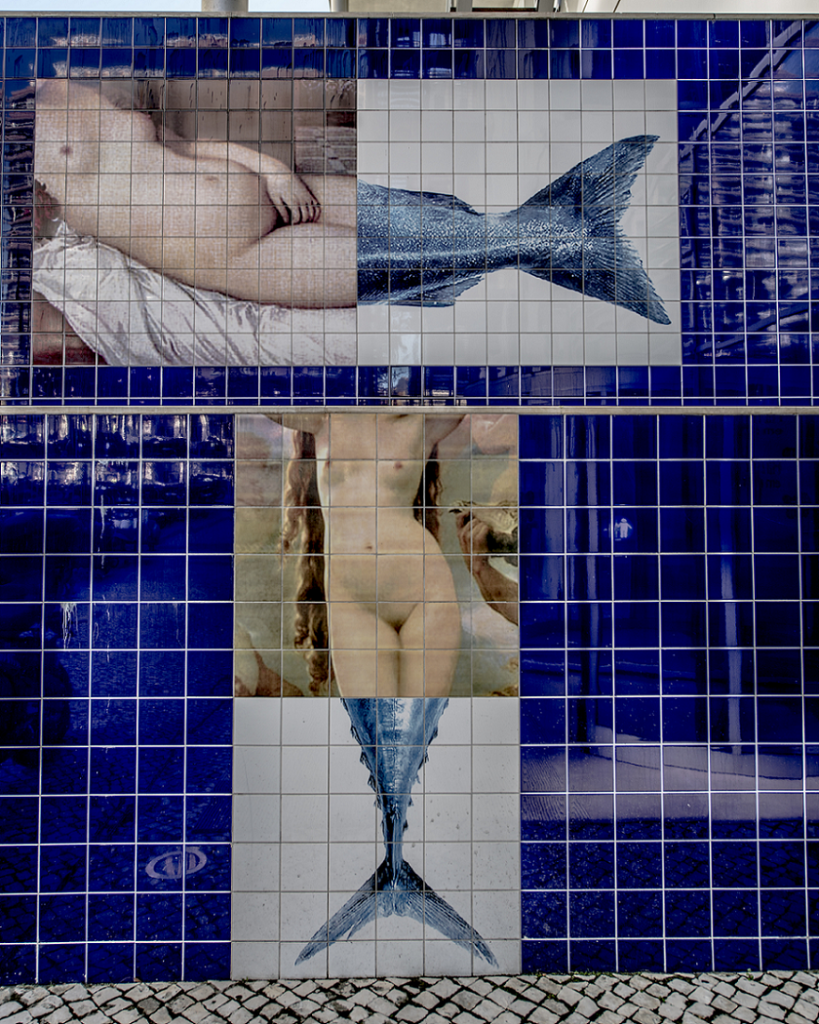 Continuing on Avenida D. João II, around the NOS building there are six tile panels by Leonel Moura who portray mermaids, drawing inspiration from Western painting, more concretely in classics of female nudes. After choosing the nude images he wanted, given his position, he clipped the fish tail through a digital collage. To complete the work, the artist uses the excerpt mermaids singing, from the epic poem Odyssey, from Homer, to the panel on the left side.

After crossing the avenue, it is time to stop in front of the VIP Executive Art’s Hotel by Frederico Valsassina, Primo Valmor 2004, to appreciate the tile panel of Erró. In this panel Pop Art, the Icelandic artist represents characters from North American comics and science fiction. Erró, Roy Lichtenstein’s last living disciple, ceded the copyright to this panel to the Viúva Lamego Factory. 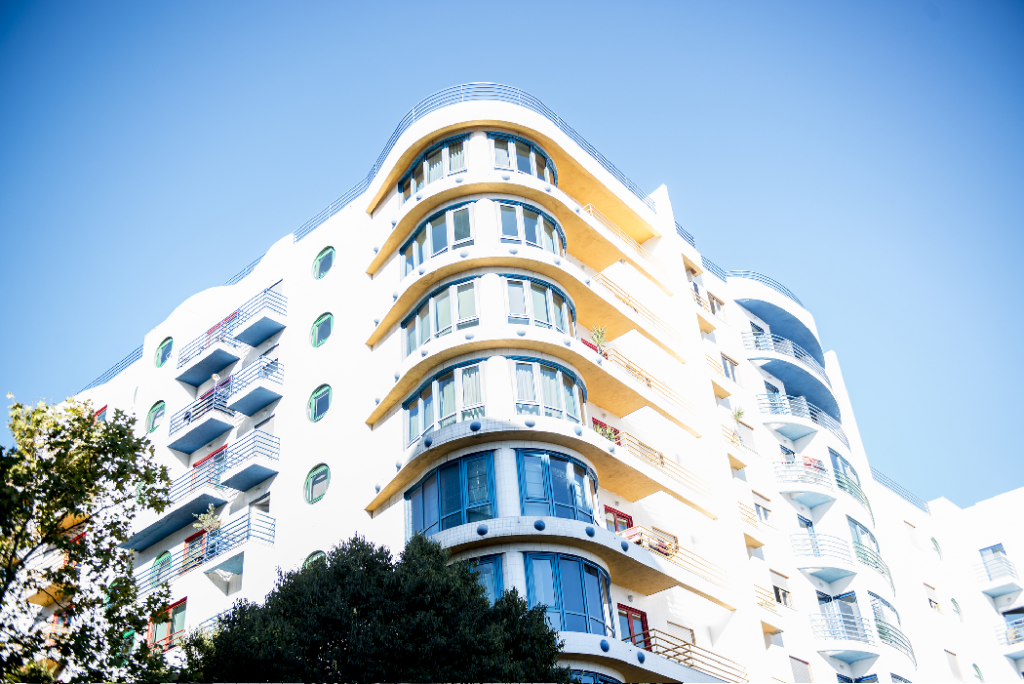 At the roundabout, go down the Avenida da Boa Esperança where, on the left, buildings of Tomás Taveira, the leading representative of postmodern architecture in Portugal. 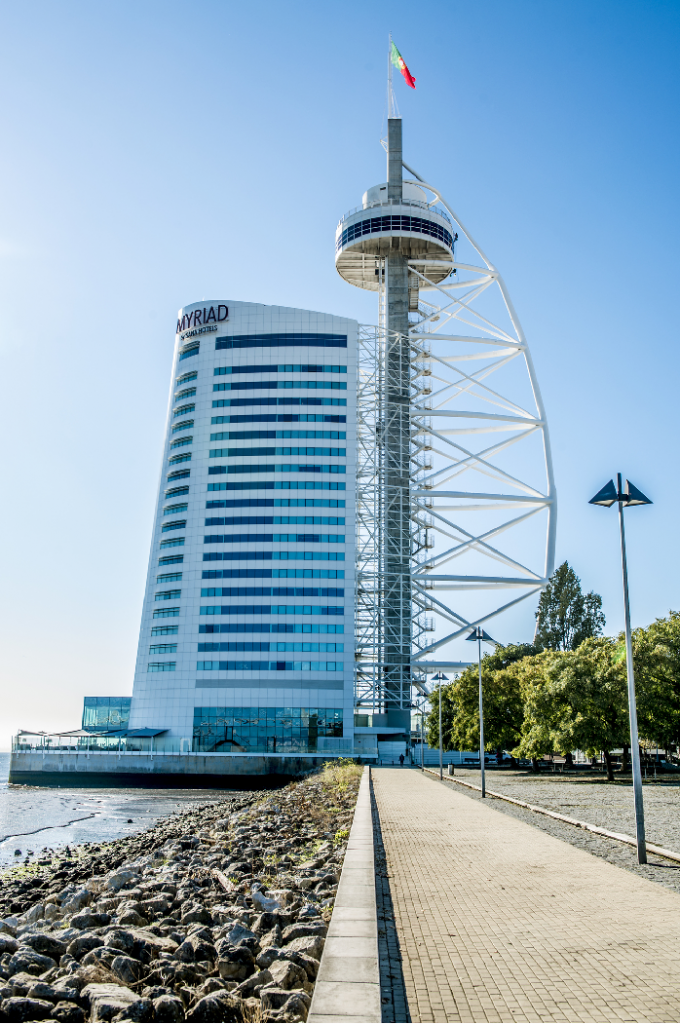 Continuing down the avenue, you come to the Vasco da Gama Tower, recently transformed into a hotel by the architect Nuno Leónidas, whose structure symbolizes two candles that embrace the tower. 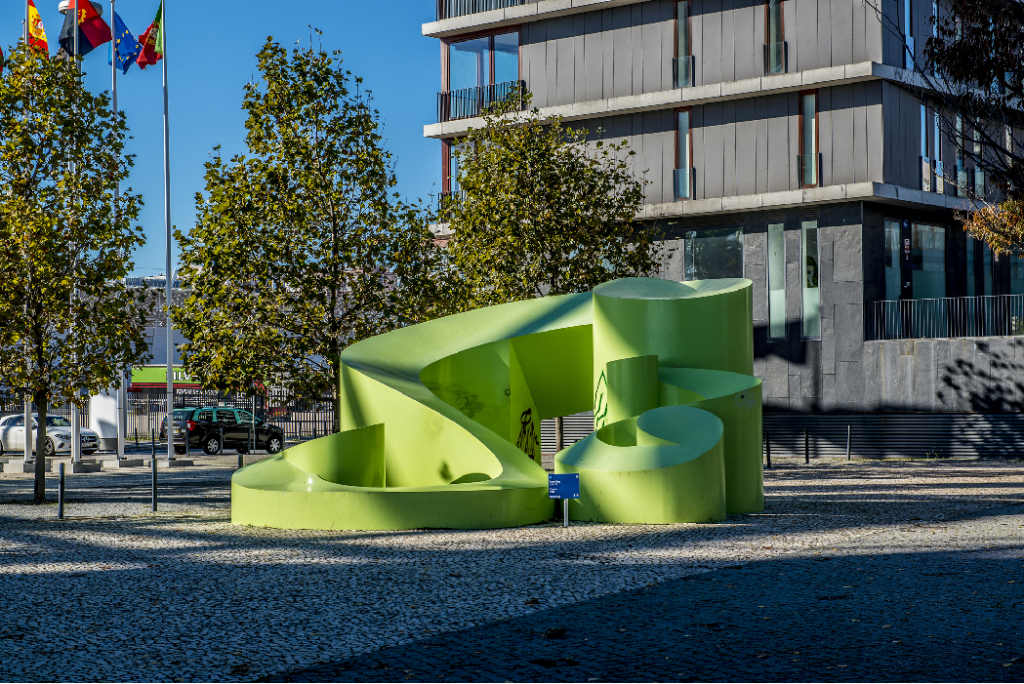 On the left side you will find Italic, a sculpture of Amy Yoes painted in iron, reminiscent of a gigantic typographic character or the three-dimensionality of a capitol of a medieval codex evoking the Portuguese baroque vocabulary. It is possible to enter the sculpture, to surround it and to try to climb it, which allows to gain, with each movement, different internal perspectives and new exterior frameworks.

Immediately behind, it is discovered There are waters, a panel of tiles specially designed for the Expo’98 by the Chilean artist Roberto Matta, last exponent of the surrealist generation. 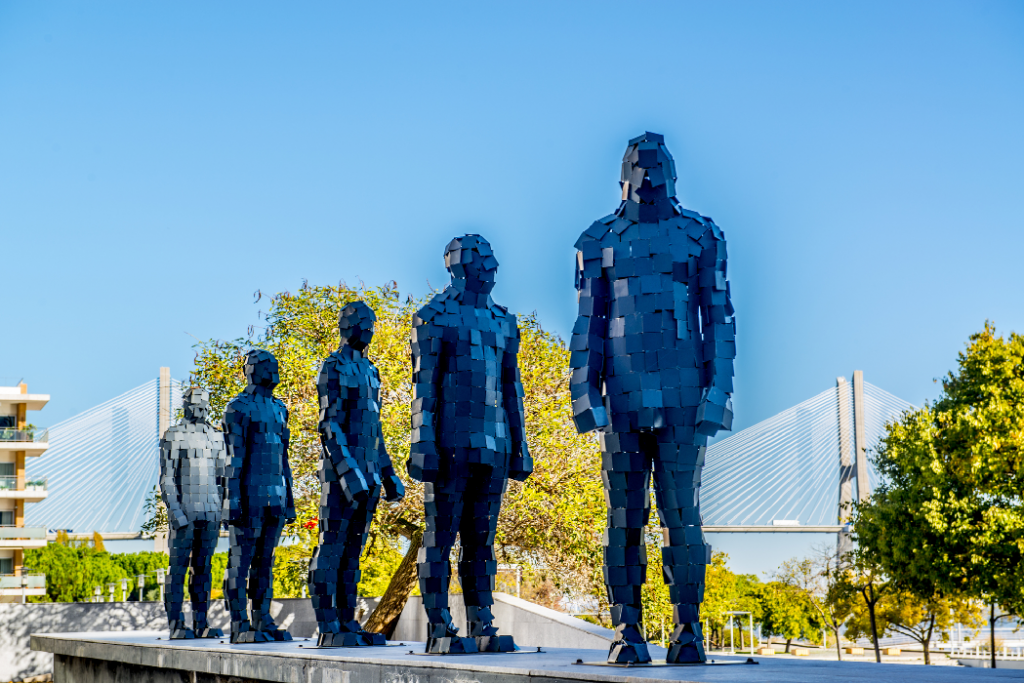 A little further on, and still within the scope of public art, The Wall Man, a work by Pedro Pires consisting of five anthropomorphic sculptures oriented in different directions, with small differences between them. Composed of small iron squares that act as pixels in a photograph, these figures aim to question the concept of identity in the contemporary industrial world. Following by Passeio dos Heróis do Mar, passing by the Olivais, where there stands a River Mountain, a sculpture of Rui Sanches composed of three circular platforms cut by a wall which intends to illustrate an island of rest. The wall is torn by a window that allows to see the river, like a painting, and a mountain, represented by the block of stone. 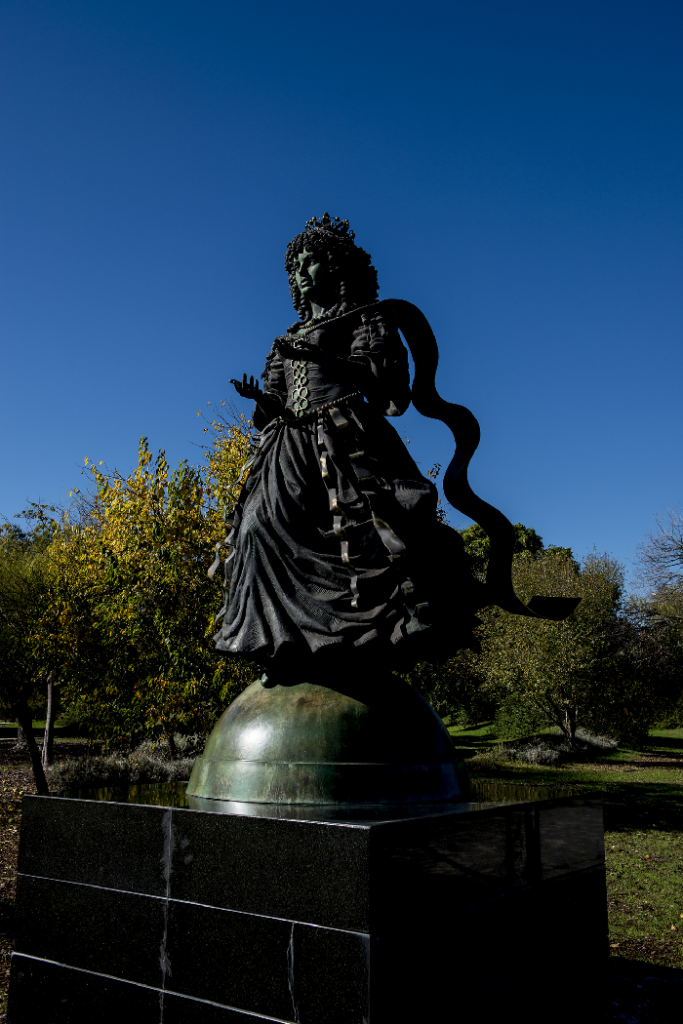 Crossing the garden towards the river, enter the Passeio do Tejo, going through it until you reach the Queen D. Catarina de Bragança. This ten meter high replica of a statue built in the United States of America of Audrey Flack, by the Association Friends of Queen Catherine, to celebrate the fact that the Borough of Queens, in New York, owes its name to this queen.