The Palaces of Junqueira 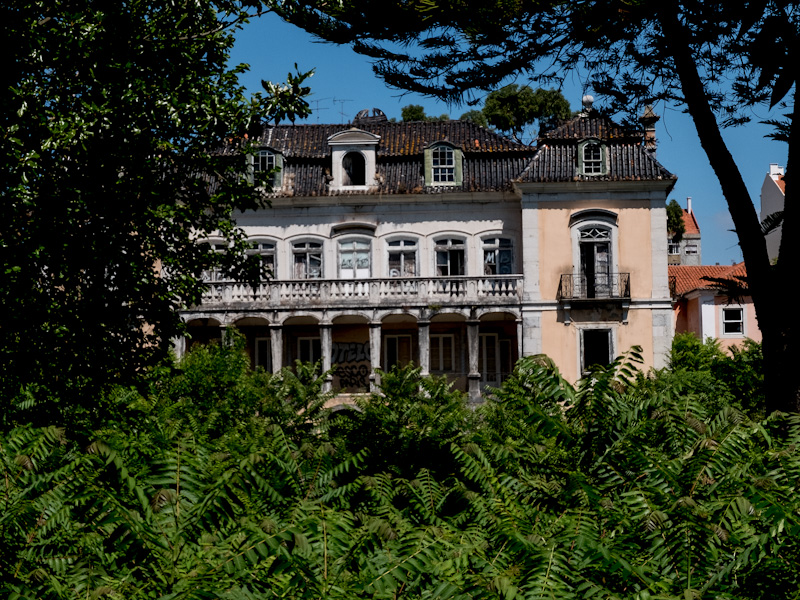 We walk through Rua da Junqueira between surprise and enchantment. Along the broad road that leads to Belém, we can see old manor houses, some closed and abandoned to the wild vegetation.  For lovers of romantic scenarios and stories of aristocrats, this is the place to see in Lisbon, such is the profusion of names and nobiliarchic titles that passed through here in just over three centuries. You reach the end of the street with a sense of grandeur, conquered and lost. Conquered to marshy lands since the 18th century, in an area called Juncal. Lost, from the end of the 19th century, when urban growth pushes the palaces away from the river and cuts the farmhouses with streets.

The reeds which grow next to the mouth of Rio Seco, which flowed here and still runs underground, are at the origin of the name Junqueira. Used for the first time in an official document dating to the reign of D. Dinis, in which the monarch donates the lands of this site to the Abbess of the Monastery of Odivelas, D. Urraca Pais, it was to be fixed in the toponymy of the city in the 18th century.  During this century there was a rush to the area by noble families who erected summer estates with sumptuous palaces that touched the river. The journey through the aristocratic memory of Junqueira begins in the Palace of the Counts of Ribeira Grande, whose coat of arms decorates the façade. The palace, that was known by Liceu Rainha D. Amélia (D. Amélia Highschool), was built in the early 18th century by Francisco Baltasar da Gama, the Marquis of Nisa and descendant of Vasco da Gama. Bought later by the Count of Ribeira Grande, it suffered little damage in the Earthquake of 1755. It was inhabitated by the son of the count, D. Gonçalves Zarco da Câmara, the first Portuguese named to the Nobel Prize for Literature. Although altered quite a bit after being adapted to serve as a school in the decade of 1920, it retained the original features on the facade, the gardens and the chapel dedicated to Our Lady of Carmo.  It awaits the beginning of the construction work that will transform it into a hotel and museum. Beyond the crossroads of the Counts of Ribeira is Palácio Burnay, one of the most imposing buildings of this street. Classified as a Property of Public Interest, it is, in its current form, a 19th century building, but its origin goes back to the early 18th century when the brother of the Count of Sabugosa erected the house. Following the earthquake of 1755, it was bought by the Patriarch of Lisbon, D. Francisco de Saldanha, as a summer residence, being known thereafter, and for nearly a century, as Palácio dos Patriarcas. In the first half of the 19th century, it changed hands again, being acquired by Brazilian financier Manuel António da Fonseca, nicknamed Monte Cristo, who remodeled it to 19th century bourgeois taste. A few years later, this eccentric man, who was said to have drunk tea in gold cups, sold the palace to D. Sebastião de Bourbon, a prince from Spain and grandson of the King of Portugal, D. João VI. Alienated by his heirs, the palace was bought at an auction in 1879 by the Count of Burnay, who performed extensive renovations, in which artists such as Rodrigues Pita, Ordoñes, Malhoa and the Italians Carlo Grossi and Paolo Sozzi participated. After the count’s death, the Palace was purchased by the state from his widow, and several services were installed there. In recent years, it has hosted the Institute of Tropical Scientific Research. Next to it stands the Palácio dos Condes da Ponte, the counts lived here until the end of the second quarter of the 18th century. The records say that after this period, it belonged to a member of the Posser de Andrade family, and that the apostolic nuncio Acciaioli, who had been expelled from Portugal in the time of the Marquis of Pombal, stayed here. In 1945, it was acquired by the Administration of the Port of Lisbon and underwent several more changes.  Outside, its garden and fence were partially demolished when the Instituto de Higiene e Medicina Tropical and some pavilions of the Egas Moniz Hospital were built. The Palácio Pessanha Valada, next to the stream, is named after two of its owners: D. João da Silva Pessanha, responsible for its construction after the earthquake of 1755, and the 2nd Marquis of Valada, D. José de Meneses da Silveira e Castro, Peer of the Kingdom of the Council of D. Luis, and chief officer of the Royal House, a man known for his intelligence and erudition. In front of this house, there was an old fort, which was turned into a prison in the reign of D. José where the Marquis de Alorna and Father Malagrida were imprisoned. It was demolished in 1939 during the works for the Portuguese World Exhibition. After the Egas Moniz Hospital, the journey is interrupted by the beginning of Calçada da Boa Hora, where the Palácio is located. Its history is linked to the apogee and decadence of the Saldanha family. The primitive building, dating from the 16th century, underwent thorough renovations in the 18th century, when the 2nd Count of Ega, Aires José Maria de Saldanha, was the owner. The magnificent Salão Pompeia (Pompeii Hall), lined with panels of Dutch tiles representing views of European ports, is from his time and is now classified as Property of Public Interest. At the time of the French Invasions, this house experienced days of glory with parties promoted by the Count, in which General Junot was a frequent guest. The friendship with the invaders led the family into exile, and the Palácio served first as a hospital and then as Marshal Beresford’s headquarters, being eventually donated to him by D. João VI, 1820. Three years later, the Saldanha family rehabilitated and demanded the property back. However, they would not be able to maintain it. It was sold and passed through several owners until it was acquired by the State in 1919, that here installed the Historic and Colonial Archive (today Arquivo Histórico Ultramarino). An extensive wall bordered by trees accompanies the return to Rua da Junqueira. The wall surrounds Quinta das Águias, the magnificent set of the 18th century that today is abandoned, although classified as Property of Public Interest. The origin of this farm goes back to 1713 when a lawyer from the Casa da Suplicação built a palace here. The property was sold in 1731 to Diogo de Mendonça Corte-Real, Secretary of State in the reign of João V, who undertook great works in it, probably under the responsibility of Carlos Mardel, to whom he was close. Diogo Corte-Real was exiled by the Marquis of Pombal and never returned to Junqueira. After his death in 1771, a long dispute between his heirs and the Holy House of Mercy, to whom the former secretary had left his property, led to the abandonment and ruin of the farm. In 1841, it was bought by public entrepreneur José Dias Leite Sampaio who rehabilitates it, presumably with a project by Italian Fortunato Lodi. After his death, Quinta das Águias, which owes its name to the two large stone eagles that flanked the gate, passed through several owners, among them Dr. Fausto Lopo Patrício de Carvalho, who between 1933 and 1937 carried out deep renovations with the help of architects Vasco Regaleira and Jorge Segurado. Currently, the palace, which has been ransacked and vandalized several times, is on sale. A few steps ahead, in a recess of the street, the colorful Junqueira Fountain demands a stop. Built in 1821, under the design of architect Honorato Macedo e Sá, it started operating the following year. Initially fed by a water mine located in Alto de Santo Amaro, from 1838 onward it began to be fed by a new source near Rio Seco. The current arrangement is by Raul Lino who ordered reproductions of rococo tiles to be put in place. In front, the rear of the Cordoaria Nacional, a building that extends for about 400 meters, was one of the first industrial centers of Junqueira. Created in the 18th century by decree of the Marquis of Pombal, it produced cables, candles, fabrics and flags.

Some doors above, one of the most remarkable buildings of Junqueira is to be found, the House of Lázaro Leitão Aranha, where today the Lusíada University is located. Built in 1734 by this important figure of the reign of King João V, who delivered the work to Carlos Mardel, this house welcomed illustrious tenants like Prince Charles Mecklenburg, brother-in-law of the King of England. It was also the scene of scandals such as the kidnapping of D. Eugenia José de Meneses, carried out in 1803 by the court doctor, João Francisco de Oliveira. There are suspicions this was ordered by prince D. João, the true seducer. The Palace went through several owners who carried out works by architects such as Korrodi, Bigaglia, Francisco Vilaça and Raul Lino. In one of these campaigns, the chapel, dating back to 1740 and dedicated to Our Lady of Conceição, was converted into a stable, and the original tiles were covered by masonry walls.

On the way to the last point of the route we can see, on the left, two Art Nouveau houses with facades embellished with decorative arches and forged iron balconies. Opposite the Palace of the Marquis of Angeja, in the square with the same name, we return to the 18th century.  After seeing his house destroyed in the earthquake of 1755, the marquis, D. Pedro António de Noronha e Albuquerque, received the land in Junqueira from the crown to build a new house, where there had previously been a fort. It is said that D. José I took refuge here after the attack against him in 1758. The palace remained in the possession of the Angeja family until 1910, when it was bought by the merchant José Alves Diniz that transformed it into a renting building, having as tenants illustrious figures such as Bernardino Machado and Almeida Garrett. In the west wing of the Palace, where a school operated, the Municipal Library of Belém has been installed since 1965.