Eastern Route I – From Poço do Bispo to Ancient Marvila

Marvila is fashionable and dresses up to precept. Under the media spotlight it becomes different every day and is the most sought after and coveted neighborhood
in the city. Walking through its streets, one can see the reason why. The liveliness brought by the new coffee shops, restaurants, charming shops and technological companies alternates with the quiet streets and old houses, old convents and palaces and ruins of old factories. The rural features, which were not erased by the arrival of the "city", are one of the marks of the landscape, as well as the unobstructed views to the river and the opposite bank of the river.

Praça David Leandro da Silva, the heart of Poço do Bispo, is the starting point of this route. Used since immemorial times, the eastern route that passed through here accompanied the bed of the river. It was on its margins that the convents, palaces and farms that supplied the city were built, mainly during and after the 16th century. The great transformation comes in the mid-19th century with the advent of industry. This wide area, well served by means of communication, including the river and, since 1856, the railway line, becomes an industrial pole with factories, warehouses and housing for workers. In Praça David Leandro da Silva, the three tramway lines that served the area crossed, something that was reflected in the area’s peculiar layout – it has the shape of a cone. The two urinals that can be found there, one made of masonry and brick and another of iron, are now rare in Lisbon. Two buildings can be seen from the center of this platform from which a good part of the local history has been written.

In front of us, in the direction of the river, we see the Abel Pereira da Fonseca Warehouses, headquarters of the company that between 1907 and 1993 was dedicated to the manufacture, marketing and distribution of wine. The founder, a large agricultural landowner in Bombarral, used to ship the wine through the river, and the unloading was done on a private pier located on the current Av. Infante D. Henrique. The building, designed by Norte Júnior, was built in 1917 and stands out for the originality of the facade: the large circular windows, with the shape of barrels, are surmounted by grape clusters and grapevine leaves in reference to the work of the company.

On the left side stands the former headquarters of a competing firm, owned by José Domingos Barreiro, which worked between 1887 and the end of the 19th century . Designed by architect Edmundo Tavares, the building, also built in1917, combines an eclectic decoration with its elegant features. This company was supplied by a railway line and, besides the headquarters and the offices, it had warehouses and a residential area for the workers. 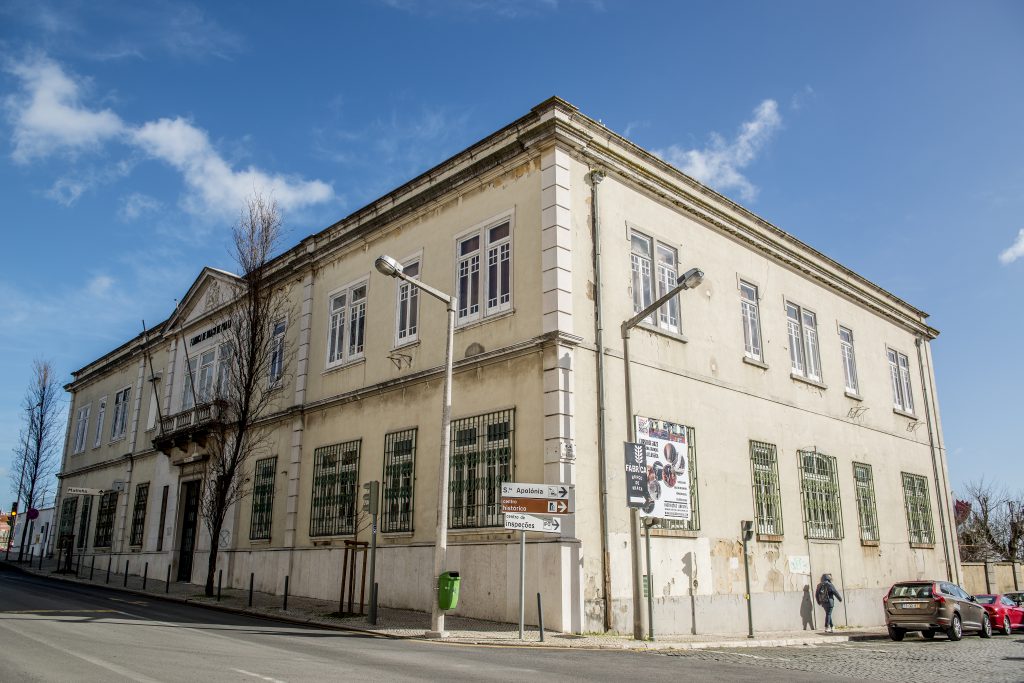 A few steps ahead, already in Rua Fernando Palha stands the old Braço de Prata Military Factory. It was built between 1904 and 1908 at the site of the Pyrotechnics Workshop and Real Vidreira and dedicated itself to the manufacture of artillery ammunition for the Army Arsenal. Later, it extended its production to weapons and vehicles, reaching the peak of work during the Colonial War. In the 1950s, there was a great accidental explosion, hushed up by censorship. Disabled in the 1980s, it was transformed into a cultural center in 2007. 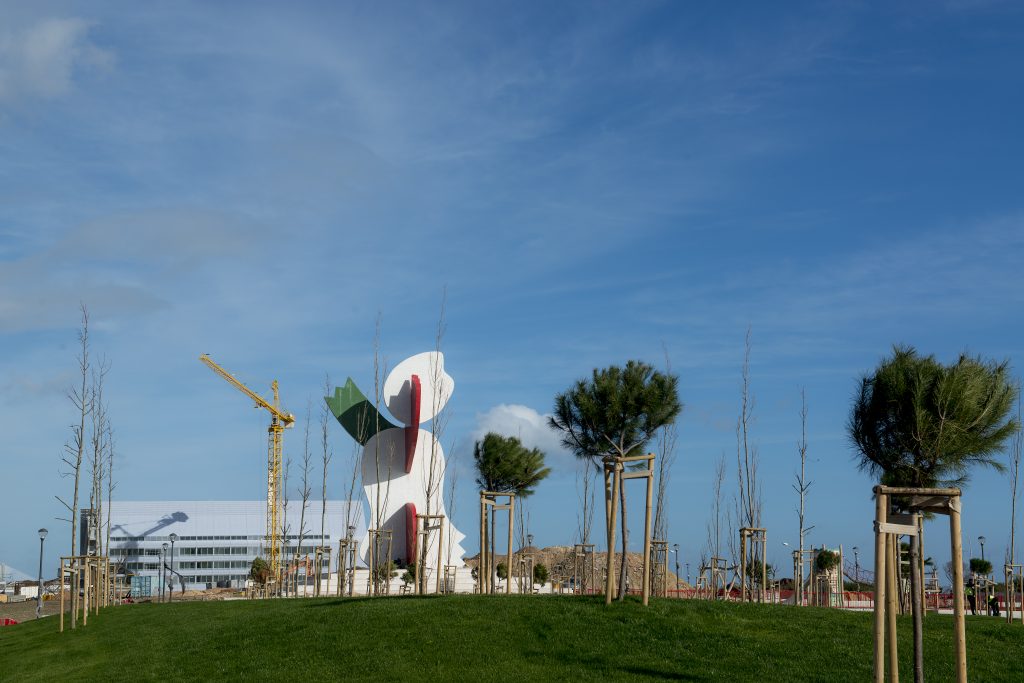 Before going to Rua Zófimo Pedroso, pause to look at the monument dedicated to the Builders of the City placed on Av. Infante D. Henrique. Sculpted by José de Guimarães in 1999, it was initially intended for the riverside area, in front of the Cordoaria Nacional. The set, which rises 25 meters above ground, integrates the Lisbon allegorical sculpture and was conceived as a reclining female figure facing the Tagus. The moment is appropriated to remember the maritime past of this busy avenue and the strong connection that existed between the two banks of the river. 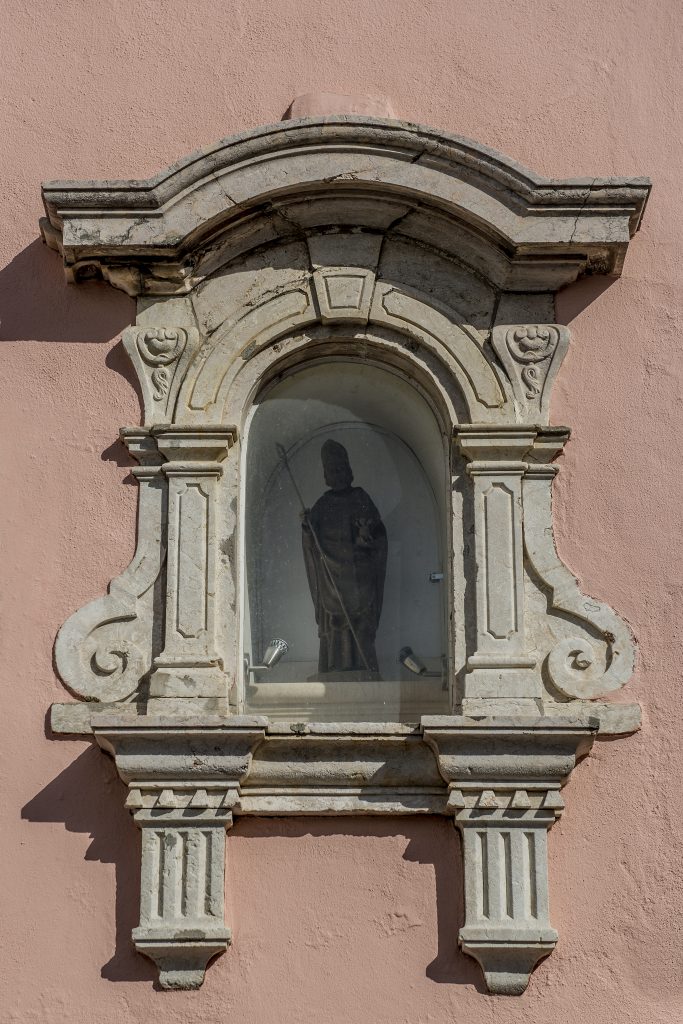 While walking towards Rua Direita de Marvila, make a short stop in Rua do Vale Formoso de Cima, to contemplate the mannerist style niche where an image of Saint Augustine was placed. From this street, on the other side of a tunnel that goes under the railway line, we reach the old Quinta de Marvila or Quinta do Marquês de Abrantes. 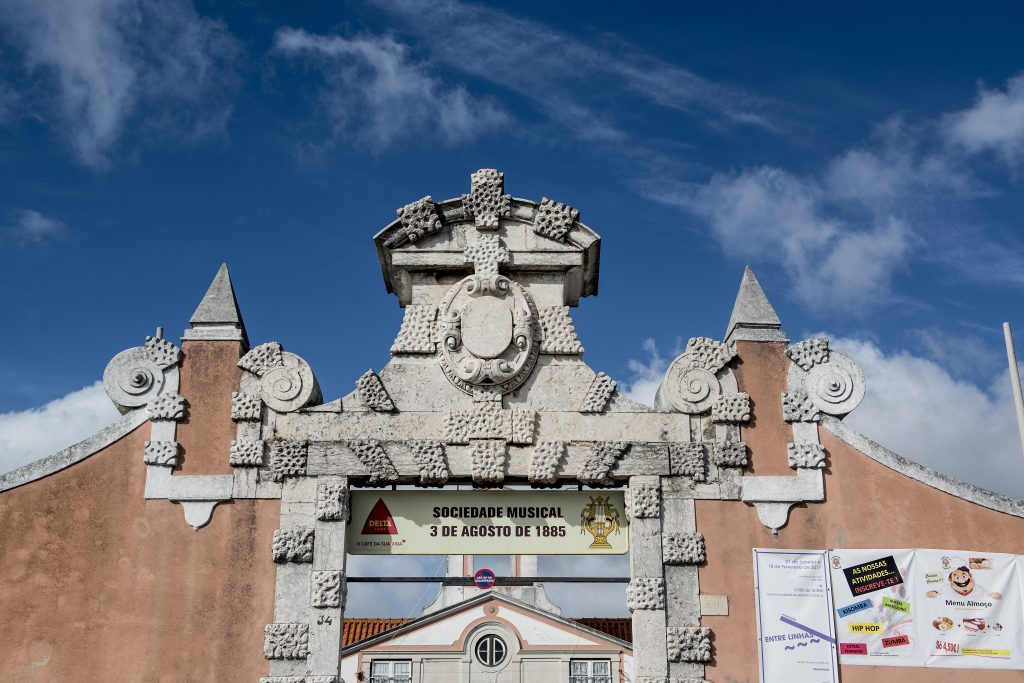 Originally, it was part of the Esporão Majorat, having passed by inheritance to the Counts of Figueiró who sold it to the Marquises of Abrantes. In their possession, the house underwent improvements, but from the middle of the 18th century it was often leased, which resulted in a slow process of degradation. In the second half of the 19th century part of the farm was expropriated by the railways and, in 1862, the main building received Lisbon’s Escola Normal Primária that operated there until it was transferred to Benfica in 1919. At that time, it was occupied by several families, who settled here. It is also the seat of the “Sociedade Musical 3 de Agosto de 1885.” It is here that the Marvila march is practiced. In the farm lands, a neighborhood of precarious housing was built, known as Bairro Chinês. Today, the imposing 17th century portal is one of the few testimonies of the grandeur of the past. 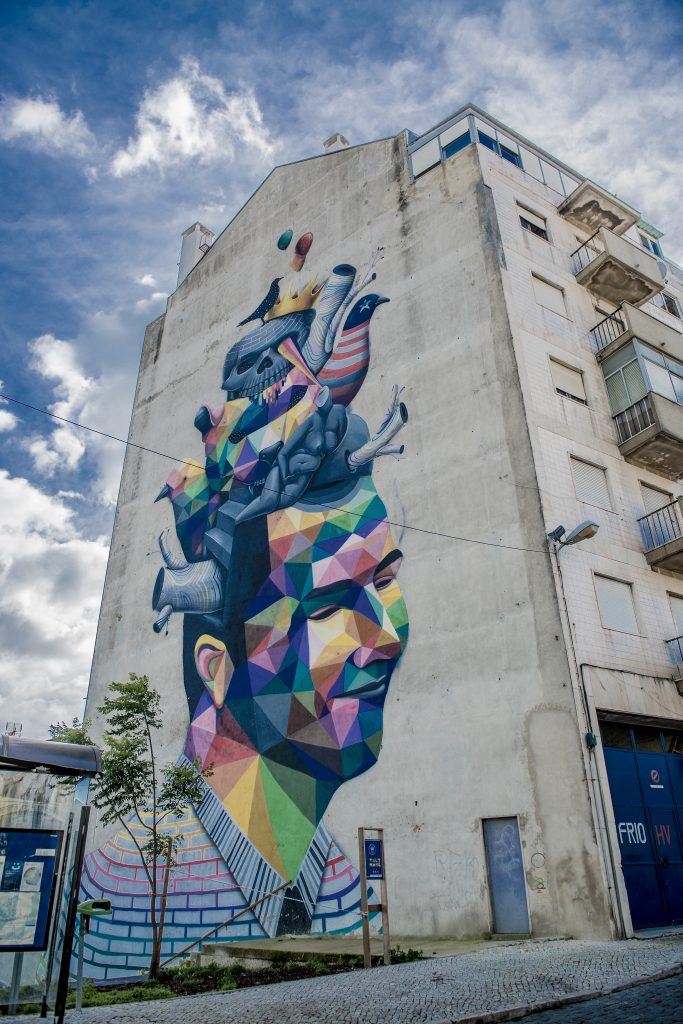 A little further on, at number 46, the great gable worked on by the street artist Okuda from Spain, surprises anyone who passes it. Titled “Jungle King” this urban work of art, one of the many that have been emerging in this area, dates from 2014 and refers to the visit of the then Prince of Asturias, now King Philip VI, to Portugal. 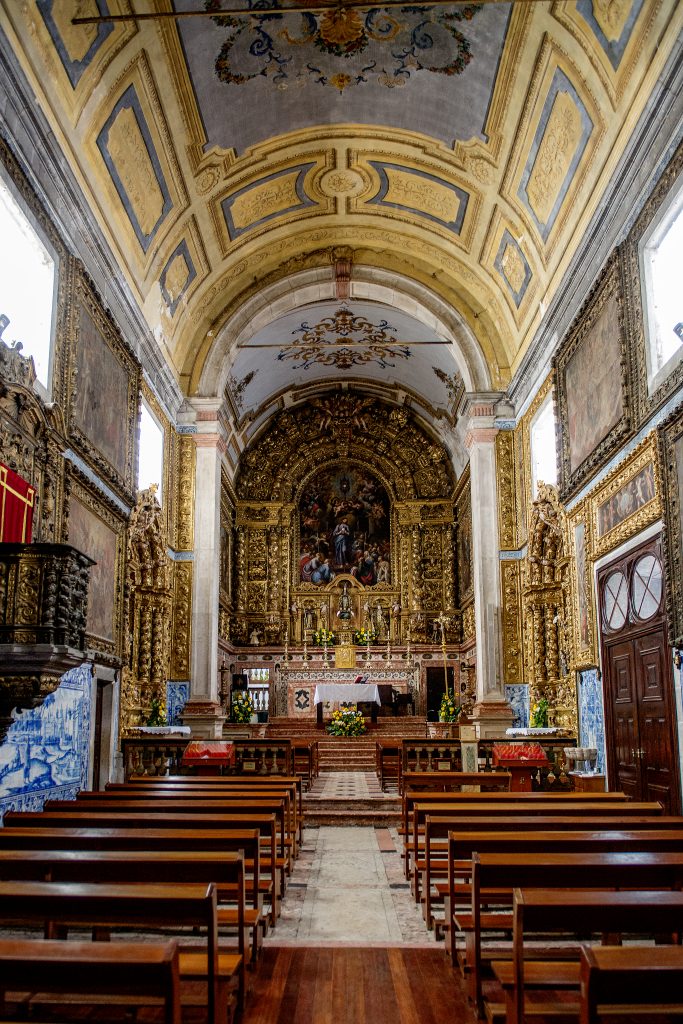 Returning to Rua Direita de Marvila, it is time to stop at the magnificent Church of Santo Agostinho de Marvila. Integrated into the former religious convent of the Order of the Most Holy Savior, or Brígidas, as they were commonly called, the church survived the earthquake of 1755, despite heavy damage. The convent, occupied today by the D. Pedro IV Foundation, was founded in 1660 by Fernão Cabral, Archdeacon of the Cathedral of Lisbon, with the contribution of D. Isabel Henriques, who retired here after being widowed, and his daughter D. Juliana Maria de Santo António. The three of them are now buried n the interior of the church. The large panels of figurative tiles that decorate the nave and the choir are attributed to the monogram artist PMP, the gilded wood and the paintings are by José Rodrigues Ramalho (chancel altarpiece), António Pereira Ravasco (nave) and Bento Coelho da Silveira (main chapel and low choir). The themes related to Saint Augustine, Saint Bridget and the Order founded by her are predominant in the iconography. 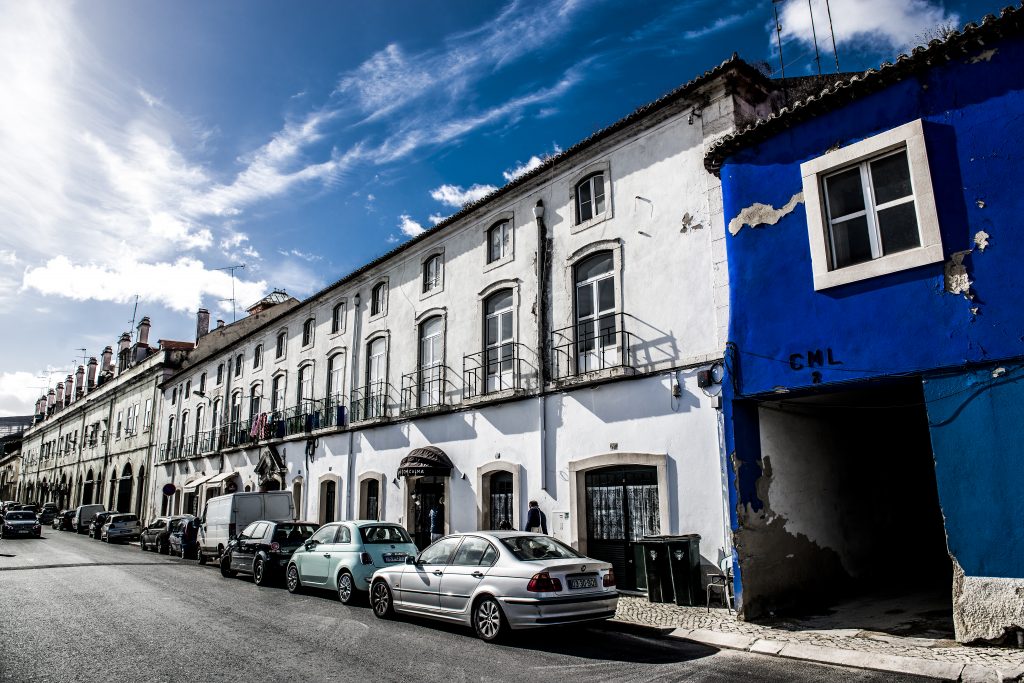 Walking down to Rua do Açúcar, we return to the industrial past of the area. At the beginning of the street, the workers housing is lined up. Of particular note is the Pátio do Beirão, born from the site of the old Quinta do Bettencourt Manor, so called in the mid-18th century when it integrated the Esporão Majorat. There was a working sugar refinery in this farm in 1763, to which the street owes its name. Unfortunately, no vestiges remain of this building. Successively leased, the farm was eventually occupied by factory workers, keeping the 18th century portal as a testimony to its noble past. Vila Santos Lima, also known as Vila Pereira, is right next door to this courtyard. Built in 1888 by Joaquim dos Santos Lima, another businessman in the wine industry, it was intended to house his employees, keeping warehouses and workshops on the ground floor. It is one of the most interesting examples of working-class housing in Lisbon, notable for its modular repetition of the facade, topped by large chimneys, and by the interior where long corridors are illuminated by skylights. 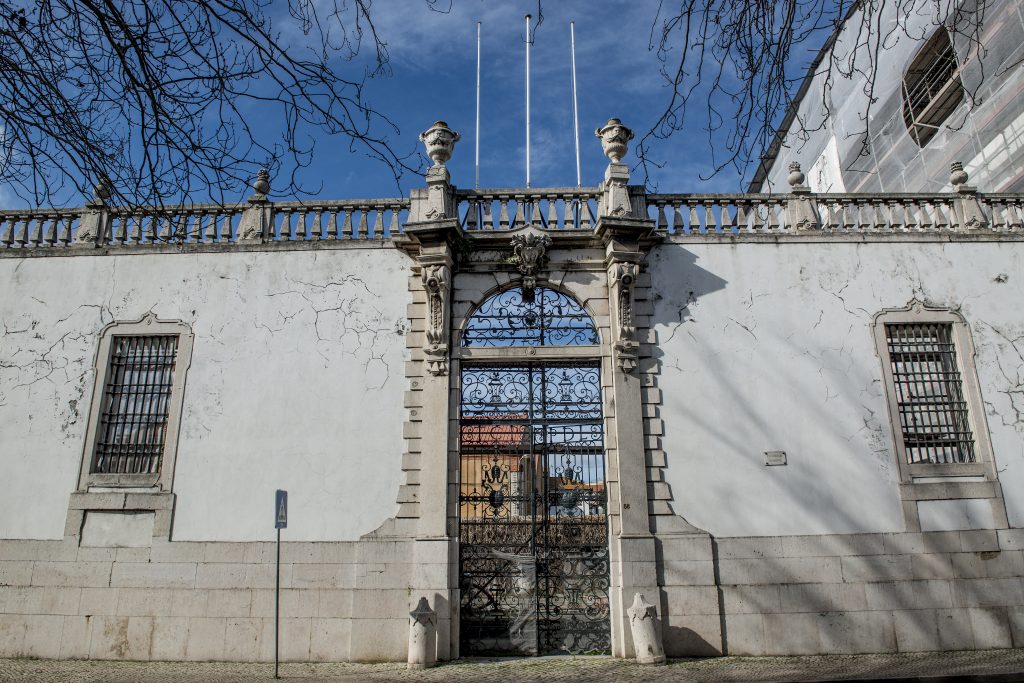 Going down Rua do Açúcar, we arrive at the Mitra Palace, an imposing construction from the beginning of the 18th century. With D. Tomás de Almeida, Cardinal of Lisbon, this building become a patriarchal residence. There are few certainties about who the architects and artists who worked here were, but some researchers point to the names of Italian António Canevari, Hungarian Carlos Mardel or captain Rodrigo Franco. The Palace, which came to have a private pier, was the object of many interventions throughout the centuries, keeping the coat of arms of D. Tomás on the gate, whose steeple is also the original. Abandoned by the prelates in 1864 – who took much of the artistic filling – the building was sold, passing through several owners until it was acquired by the Lisbon City Council in 1930. From then on, the Asilo da Mendicidade (1933), the Library (1934) and the City Museum (1941-1970) all functioned in it. 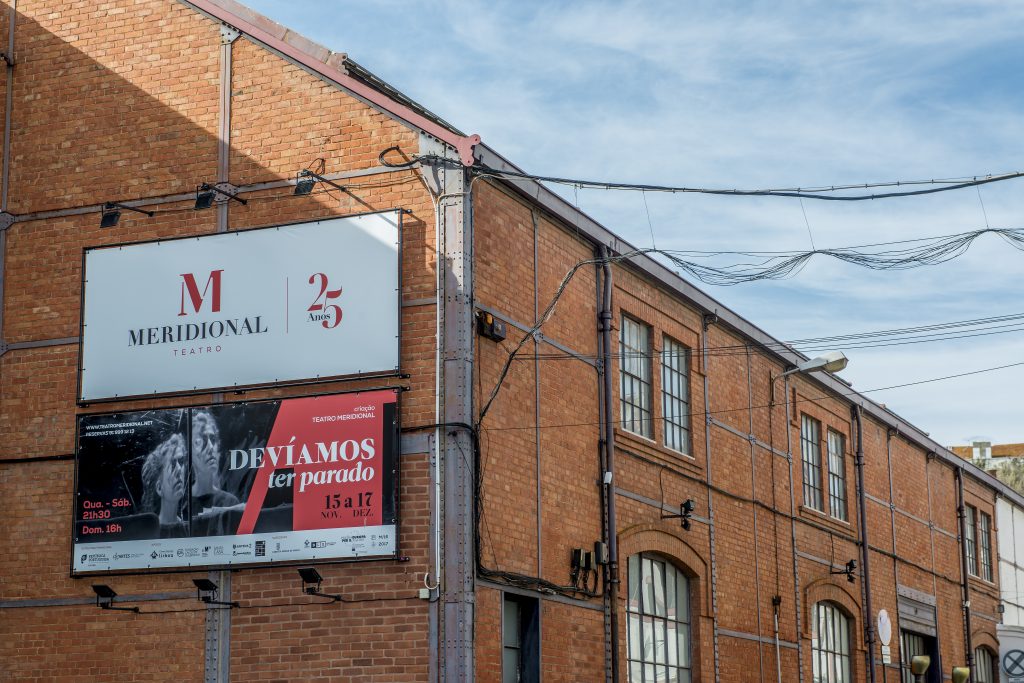 Going around the palace, we enter Beco da Mitra, a place where several brick buildings stand. One of them, property of the local authority, houses, since 2005, the Teatro Meridional, a company founded in 1992 and several times distinguished nationally and internationally. 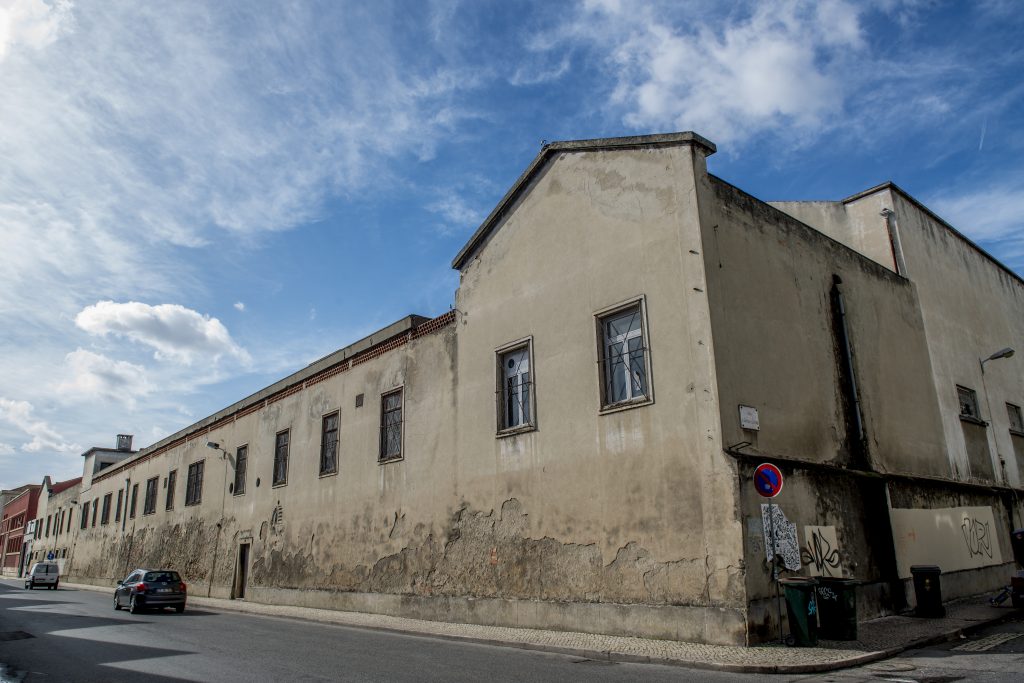 The old Matches Company is the next step on the way. Founded in 1895, on the proposal of Hintze Ribeiro, this company had the monopoly of the production of matches. The majority of its shareholders were of Portuguese nationality. The factory of Beato, an unusual structure closed in on itself, that worked until 1985, had about a thousand workers. Inside it had medical service, showers, cafeteria, day care center, a cooperative and a sports group. 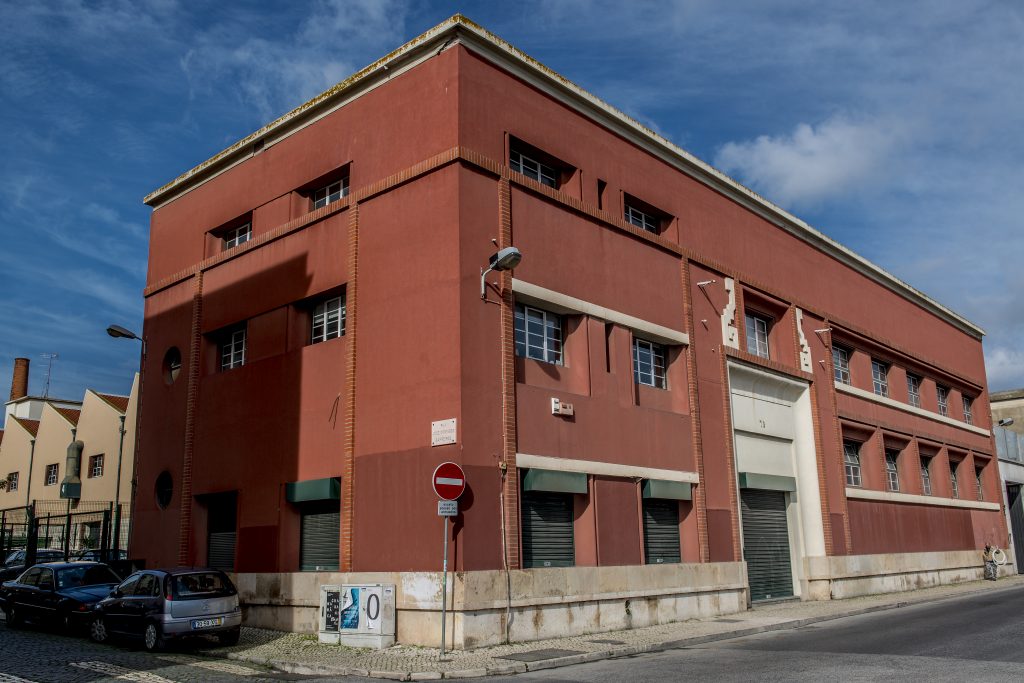 Right next to it stands the modernist building of the former Luso-Belgian Rubber Factory. Founded by Victor Constant Cordier, it worked between 1926 and at the beginning of the 1980s and, as the name implies, it was dedicated to the manufacture of rubber products and accessories. The current building, a notable example of industrial architecture, was built in the 1940s, but the author is unknown. Going down Rua José Domingos Barreiros, we find the geomonument of the Middle Miocene (13 million years old) where vertebrate deposits are visible. 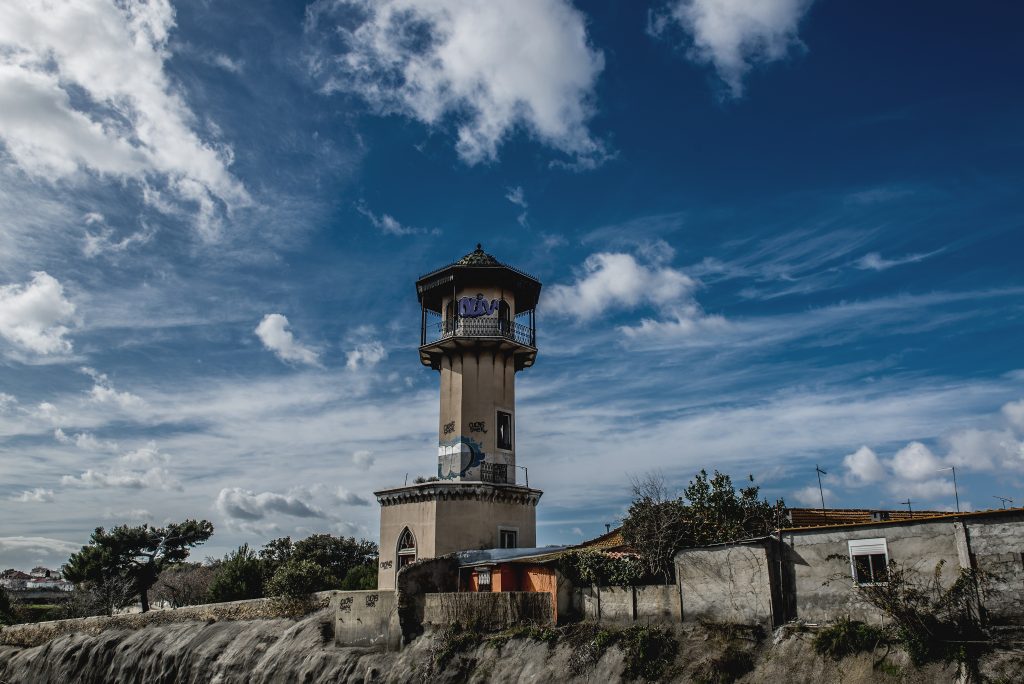 Before arriving at the last stage of the route, we must stop at Rua dos Amigos de Lisboa so that we can appreciate Torre do Marialva, the last vestige of Quinta do Marquês de Marialva, whose gardens were acclaimed by the Englishman William Beckford. From this viewpoint, today quite run-down, D. Pedro V watched, in 1856, the passage of the first train. 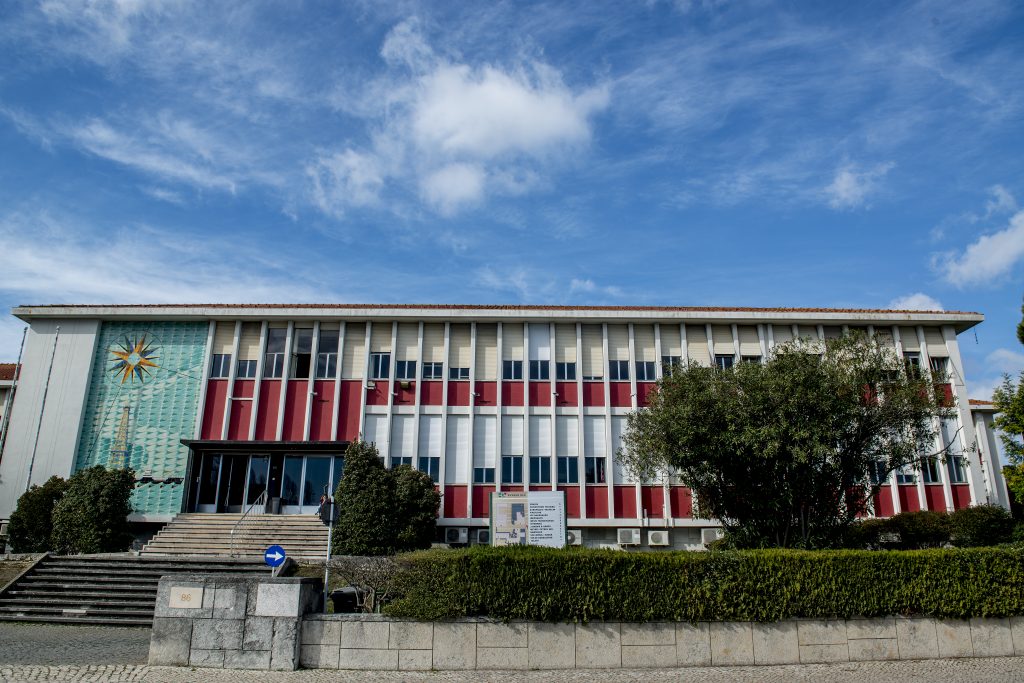 The tiles on the facade of the building of the former Sociedade Portuguesa de Navios Tanques (SOPONATA) are the best way to finish off this itinerary. Dated from 1950, they are a work by Júlio Pomar and Alice Jorge, at the time husband and wife, and represent the activity of the shipping company founded on 1947, which was mainly engaged in oil transportation.