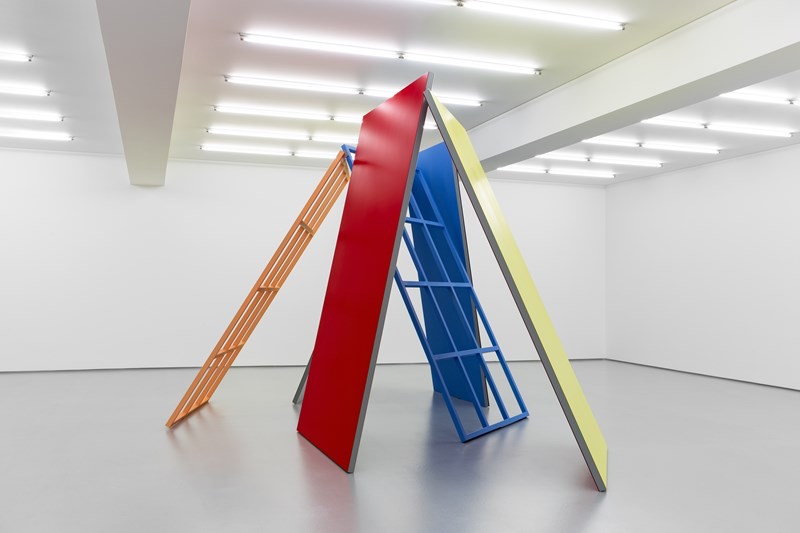 José Pedro Croft’s exhibition 1 Nova, 2 nemTanto presents three sculptures, three inedited works, evocative of the imaginary of an “estela”, a primordial structure that suggests itself activated through its installation. The sculptures operate within the space, allowing the artist to establish a dialogue with the various agents present in the room, such as the spectators, the light, the precarious balance and all its intrinsic elementary forces, in addition to, concomitantly, the object itself, as an item, matter, role, possibility and choice. Thus, not only does it question our relationship with space and gravitational forms, but it also implies the act of involving ourselves, of playing with simple and primordial objects.

The two sculptures – one made of wood, marble and plaster and the other in wood and plaster – are both made from reused doors that have lost their function and are released, with their meaning displaced, and composed of different materials, as if the “original” had been deleted. The item becomes another, which in turn is reinforced through the addition of new elements and installed in a different way, acquiring other levels of perception, and thus creating a new narrative. The centerpiece is composed of layers, an architecture of rectangles, evoking the image of a hut, a kind of primitive shelter. The iron plates that make up the sculpture, which are also a reminiscence of the suggested “estela”, are united two by two, joined at one point, and painted with inspiration in the Baroque. In the middle of the plates, a set of two grids, recall Croft’s drawings, reinforces the light as part of the work, making it dynamic in its unstable balance.

Tuesday to Friday, from 2pm to 7pm