'Arena' at Garagem do Chile

The desire for experimentation, taking risk and “not even being afraid to fail” is felt at every moment of Arena, secondcreation of the collective Outro, directed by João Leão and Sílvio Vieira, the latter author of the show. Explain what is going on there, especially when said arena is in an old car workshop located in the heart of one of the residential neighborhoods of the parish of Arroios, it would be like unraveling part of the mystery that surrounds this scenic adventure, where nothing is predictable or neglects the effect of surprise.

However, without pointing out a path, we can reveal the existence of six creatures that move as an organic unit (which the author called Jan), although each plays a role in the collective. Routinely, they undertake a ritual movement, until one day, it will be shaken when, from inside water (literally), an alien character emerges in an astronaut suit. 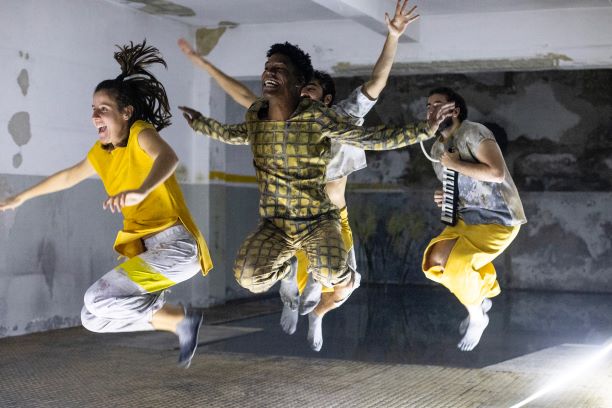 In arena’s genesis was the premise that it would be a theatre show without a word. “When two years ago, even before the pandemic, we started working on the project it was thought that the pillar would be the translation of music into the theatrical scene. As the choreographer who translates music into gestures, here, the goal was to translate it into theatricality, that is, in images, situations, characters”, explains Sílvio Vieira.

Throughout the creative process, it was precisely from the music that the actors improvised, birthing the essentials of Arena’s situations. But, contrary to the scheduled, something essential happened: the show would not happen in the black box of a conventional stage, but in a garage. “When we got here, I asked the actors to look at the space, choose a corner and try to explore it,” recalls the author, stressing how the architecture of this old abandoned workshop, at 21A Rua Carlos José Barreiros, “entered the dramaturgy of the show itself, being impossible to transport what happens here to another place.” 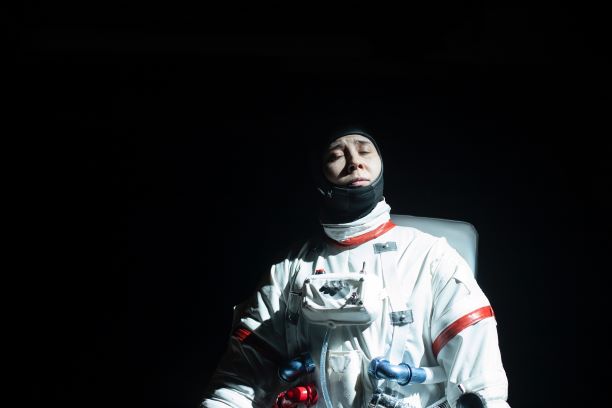 Without imposing a narrative line or, as the author points out, “any political and ideological concept”, Arena is revealed as an artistic object of full freedom, “where what has been valued is experimentation and the search for beauty, or a certain poetry. As the dipositive is opened, any viewer can read as they see fit. And that’s something I like about a show,” Vieira recalls.

This scenic adventure that combines with great ingenuity and irreverence movement, sound, light and an imaginary whole claimed of silent cinema and the great names of comedy, such as Charlie Chaplin, Buster Keaton or Harold Lloyd, is starring young actors Anabela Ribeiro, André Cabral, Catarina Rabaça, Inês Realista, Miguel Galamba, Miguel Ponte and Pedro Peças. In the course of the cultural association Outro, born in 2018, Arena is the successor of As trees let die the mostbeautiful branches, a show also written by Sílvio Vieira, premiered in 2020 at the Temps d’Images Festival.